LAHORE - Maintaining that the existing electoral system has failed to deliver and will bring to power only the same old faces which have been there on the political scene for decades, Pakistan Awami Tehrik Chairman Dr Tahirul Qadri proposed the installation of an ‘interim setup’ for a period of three to four years to set the flawed system right before holding the elections. 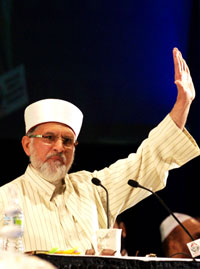 The proposed setup, he said, should comprise honest and eligible politicians, traders, bureaucrats, industrialists, journalists and technocrats and complete the assignment within the set deadline.

He said this while addressing a news conference through video link from London on Thursday night. Dr Qadri said all those manning the proposed system should not take part in the elections. The PAT chairman, who has been out of the country for the past several years, made it clear that he would not contest any election nor was he a candidate for any government office. Also, he said, his proposal should not be taken as a call for the military to intervene.

Nobody would have to suspend the Constitution to implement his proposal. The Constitution, he said, was flexible enough to create a room for it.

He told a questioner that the Supreme Court could be approached to ensure that the deadline was not extended by anyone. In response to a question, Dr Qadri said he was of the firm opinion that even a hundred elections under the existing system would not solve people’s problems because the same sardards, waderas, chaudhrys and khans would return to power who had the pocket to spend tens of millions of rupees in their election campaigns.

Pakistan, he said, needed a system where a capable person, who had not enough financial resources, could make it to the assemblies.

The PAT chairman was scheduled to return to Pakistan on November 4, but the plan has been delayed for various reasons. The new date will be finalised keeping in view the situation in the country. His party has made arrangements to give him an ‘unprecedented’ welcome in Lahore. ‘Millions’ of people would be present at Minar-i-Pakistan to listen to Dr Qadri’s address, party leaders claimed.

The existing political system was neither democracy nor authoritarianism, he said, adding “Pakistan is in the foggy zone”.

In his opinion, Pakistan should proceed towards ‘genuine democracy’ and not just ‘electorism’, a new terminology coined by some Western political scientists.

Dr Qadri said although poor people cast their votes to their ‘lords’, they did not know the significance of their participation in the process, or the change it could bring about if the process was fair. In response to a question, he said no system could be called democratic unless the military people were under the control of civilians.

Similarly, he said, Pakistan should have a system which could address all its needs.

Following the Westminster democracy without having an equally sophisticated infrastructure was like mounting a jet engine on a bicycle, Dr Qadri said implying that the two were not compatible.

The PAT chairman said all countries had tailored their political systems according to their requirements and Pakistan should also follow suit. “We need democratic constitutionalism”.

In response to a question, he said Pakistan could disintegrate if it continued to hold elections under the existing system.